From Bespoke Investment Group, here's what 60/40 has been up to; 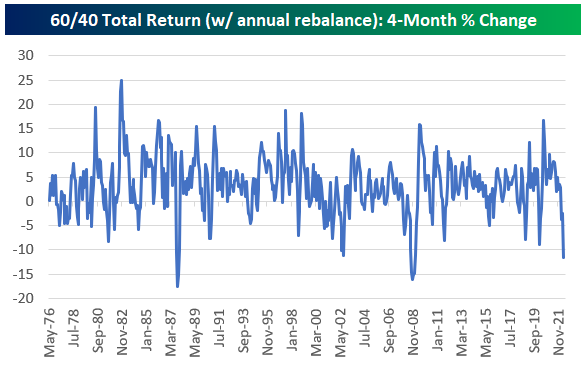 So it's not unprecedented but unlike 2008, there doesn't seem to be any visibility for interest rates to go down.They've been going up of course, the FOMC is making it clear that there are more rate hikes to come which potentially hurts 60/40 or at the least is a headwind. Quite a few pundits believe that most of the damage to the middle of the curve and further out has already happened which would mean 10 and 20 year treasury yields would not go much higher than 3%. Most of the damage being done at this point would surprise me. That's not really a prediction, I don't need to try to guess for any professional reason what yields will do but if I had meaningful exposure to that part of the market I would emotionally prepare for more pain to come there.

Here's a another chart showing some of what's going on.

Recently, on NotePD I wrote a list called Embracing Orthogonality that looked at where to deviate from the crowd to do your own thing and why you might be better off for those deviations. For as long as I have been writing about wanting to avoid intermediate and longer fixed income, it occurred to me that I've been orthogonal to a 60/40 portfolio this whole time, for more than 15 years, long before I ever heard the word orthogonal. I can't believe I didn't put that together sooner.

Side bar, that's one of many great reasons to write, you figure things out.

Back to fixed income, buying bonds with very low yields to try to book capital gains like they're stocks is not my trade. "A man's got to know his limitations" and trading bonds that way is one of mine. It seems like a level up on the normal equity market speculation that goes with 60/40.

If you've been reading my content about this for a while, you might recall that I think it is more correct to say 60/40 has evolved with respect to the 40, the fixed income allocation.

For years I've been talking about avoiding interest rate risk using shorter maturities, floating rate, short dated TIPS and certain alternatives that function as bond market proxies. The chart compares two different alternatives in my ownership universe and the iShares Aggregate Bond ETF (AGG) which is like the S&P 500 of the bond market.

I think BTAL, which goes long low beta equities and short high beta equities, is a great fund but it most certainly is not a bond market proxy. MERFX is also a long short fund focusing on merger arbitrage which seeks, and provides much less volatility than BTAL. I think MERFX is a very good bond proxy, more correctly, a proxy for a total return profile with low volatility that you might hope to get from bonds. MERFX does not take interest rate risk to get that bond-like return while AGG does, that is what has done AGG in so far this year. A double digit decline for AGG in just four months is really a lot.

We had a 40 year bull market for bonds, although there were some short, sharp counter trend declines in bond prices (short term yield increases). I'm not thinking in terms of a 40 year bear market to revert to some sort of mean. I doubt it would be anywhere close to ten years but several years of a lousy bond market seems reasonable until we start to get yields that become more about clipping coupons than trading for gains. I will continue with my approach for now, probably for a while expecting that a pivot to a more traditional fixed income portfolio will make sense again at some point.

Barron's had a couple of good articles over the weekend, one was an interview with Harold Evensky about sequence of return risk and the...